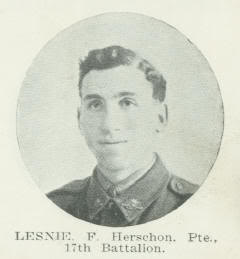 Residence before arrival at Australia From mother's letter: 'I came to London when my son was a baby and brought him up to the age of 17'. He was educated in London at Norwood orphanage school, where he was school captain, and at Regent St Polytechnic.

The case of 'Frank Bernard, a native of London', was similar. Here was another young Jewish man originally from the Russian Empire who grew up more familiar with British culture than his own and, made a conscious -- indeed, proud -- decision to offer up his life in the company of his new-found antipodean comrades, serving under a different name.

He was actually born, as his mother informed the military authorities, Frank Bernard Hershorn Lesnie and not in London, but Warsaw: 'I came to London when my son was a baby and brought him up to the age of 17'. Educated in London -- at Norwood orphanage school, where he was school captain, and at Regent St Polytechnic -- he emigrated to Australia at 18 years of age. Two years later, in 1915, he found himself on the way back to Europe, aboard a troop-ship carrying Australians to the Great War. Upon being asked why he hadn't enlisted from England, instead of Australia, he wrote in a letter home: 'Oft times I think of the old good days, to me they seem years and years ago, of Home, sweet Home, of the many attempts to break my neck on a cycle ride, of the fun and pleasure of a holiday at a sea-side resort. Fun, life, beauty, Home, but to return to it all as one of the crowd of workers -- no, not I. Australia, the home of workers, will suit me in the capacity of a worker or a soldier. I have a love of freedom which would have been denied me, had I joined a home regiment.'

[...] With the 2nd Division now safely behind the lines [after the battle at Pozières in July-August 1916], Frank Lesnie sat down to write a letter: 'We returned from Hell ... We were in the trenches 9 days, and every day seemed a week and every night was a month. The last 4 nights a party of 50 men (I was one of the lucky ones) were kept in the reserve on the 18th Battn. The Hunks [sic] bombard the reserves and supports very heavily at night, always fearing an attack. ... We crouched in reserve for four solid nights, waiting for our turn to come, that is waiting for a shell to lob in the trench and take us on a very long journey.' His letter finished with reflections on a topic that must have been preoccupying him. 'Now to the original subject under discussion. ... Your statement that I would not have my present nature had I been other than a Jew. ... You say only a Jew could die as did the Rabbi at Keshineff. I've seen men die -- game, by gad. The instance of the rabbi is nothing compared to them.' This was the last of his letters to survive.