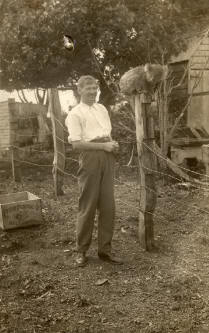 Residence before arrival at Australia When 4 years old, after father's death, family moved to Revel (Tallinn); when 14-16 years old lived in Germany; was at sea; served in French legion, escaped from it in Singapore; was in America, returned to Russia.

The case of Nicholas Kotzebue [...] is well-documented. The bearer of a distinguished German name, Kotzebue was born in the Ural Mountains, where his father was involved in goldmining; his father died four years later and the family moved to Revel in Estonia, where Nicholas was brought up. As a teenager he spent two years in Germany and finally, after many adventures, settled in Australia at the end of the 19th century, when he was 20 years old. Having been a mechanic before enlisting in the AIF, he served in France with the Engineers, and subsequently studied at the Anzac wireless school. Then he had a brief spell, from April to August 1917, with the 1st Anzac Intelligence Police. He returned to his unit and in early 1918 was invalided back to Australia with wounds received at Ypres, although he arrived back not just with physical wounds but in a mentally disturbed state, too. It is very painful to read the letters with which he bombarded the Intelligence section. Through the incoherent jumble of his words, and through his fears of persecution, his main obsession emerges -- to prove that he is not German (I could have demonstrated that, culturally, he was definitely Russian; for in these letters his handwriting still occasionally slipped into Russian script, even after more than 20 years away from Russia, and despite his mental illness). He also develops a determination to prove that not all those with 'names ending in skii in Russia are scoundrels'. Among his letters Kotzebue has a photo of himself beside a koala sitting on a post, accompanying his 'little joke', written out in his inimitable orthography: 'The other day the found this indevidual on top of a telegraph post undobtetly communicating the boght me to inturpet but I culdent make out was his name Teddy Bear or Teddy Berg in this last case it would be german. Culd I advis dath it meight auer clever detectives Billinghurst and Davies wuld see in to the matter and decide shuld he be inturned or just sent op a gum tree. he is behaving very peculiare at thimes, screwing in a ball and grunting like a pig.' To be fair to the Intelligence officials, however, they always treated Kotzebue with respect.