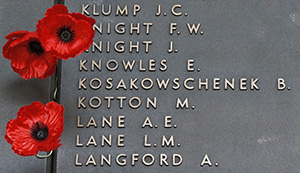 Arrived at Australia
from Dairen, Korea
on 4.02.1912
per Kumano Maru
disembarked at Brisbane

Fear resonates, too, in the words of Moisey Kotton, a Ukrainian Jewish Anzac who arrived in Australia with other Russian emigrants travelling via the Far East. When applying for naturalisation, he wrote: 'Since I arrived in Australia I lived under the name of Max Kotton. The reason I done so was the fear being send back to Russia: I have not done any crime except leaving the country, which is a crime itself according to the Russian law.' In the end, though, he didn't have to worry about returning: a few months before the armistice he made the supreme sacrifice -- as an Australian, which he had wished to be.