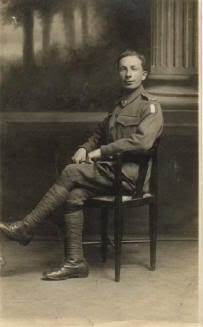 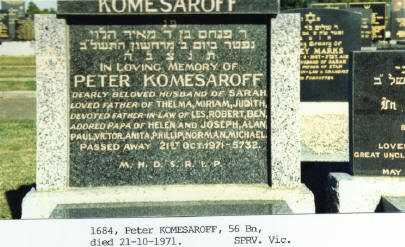 Arrived at Australia
from Russia
on 8.12.1913
per Konigin Louisa
disembarked at Melbourne

[Australian Council for Civil Liberties], It can happen here! the case of an A.I.F. soldier, a naturalised British subject, Melbourne, ACCL, 1944.

Peter Komesaroff came to Australia at 14 years of age with his siblings, and lived in Melbourne 'with his sister and brother-in-law and worked in their drapery shop', according to his daughter, 'until he ran away to New South Wales, put his age up to 22 years and 10 months, and enlisted in Cootamundra. How they could have believed him is amazing! In the only photo existing of him in uniform he looks like a boy scout.' [...]

Peter Komesaroff was one of the few who dared to say 'no' to this pervasive mood of suspicion [during the Second World War]. At a public meeting held in August 1943 by the Carlton-Fitzroy sub-branch of the RSL a resolution was put 'protesting against foreign-born persons and naturalised British subjects being permitted to sell any commodity' in the area. 'So-called naturalised aliens were only aliens after all', argued the sub-branch president. Komesaroff, an active RSL member of a neighbouring branch, was present at this meeting and asked:

'Of course it is not meant to include you', was the reply.

'I am not concerned whether it was meant to or not meant to', Mr. Komesaroff said. 'I am a naturalised British subject, born in Russia, served with the A.I.F. in 1914-18 war, over four years, and I am crippled for life as a result. This resolution says you don't want so-called naturalised aliens in business. Does it include me?' ...

'It does include you, but you know the Government may not carry it out.'

The resolution was quickly carried, after which Komesaroff again stood up.

'This is not a question of me, but of you', he said. ... He moved up the aisle, and tearing his R.S.L. badge from his coat he tossed it up on to the chairman's table. 'I refuse to belong to a fascist-controlled organization', he said, 'and, therefore, I resign from the R.S.L.'

The Australian Council for Civil Liberties, in publishing an account of this case, warned Australians that 'The first sign of fascism is ordinarily an organised attempt to cancel those principles of justice that are the basis of democracy'.

Komesaroff, his daughter says: 'did not ever return as a member of the RSL after that, that was finished'. It did not matter to him that the sub-branch's resolution received no support from RSL headquarters or the government.

Nevertheless, Komesaroff's experience with the RSL did not deter him from his passionate engagement in community affairs; he had a reputation for being 'one of the few who knew how to implement ideas'. He worked hard for Jewish immigration in the late 1930s, at a time 'when Australia was not particularly interested in the fate of Hitler's victims', spending 'hours each day going from person to person obtaining the necessary guarantees for each Jewish permit'. During the 1939-45 war he was involved in various committees instrumental in raising money for the war effort, and in the organisation 'Sheepskins for Russia'. After the war he worked with the 'Aid for Israel' committee. His friends used to say that he had become 'himself something like an institution'.