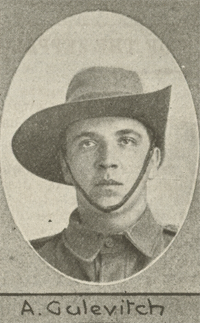 Arrived at Australia
from Russia
on 1.05.1910
per Yawata Maru
disembarked at Brisbane

But suspicions often had tragic outcomes. Nicholas Gulevich, an educated man and a good gunner, was invalided back to Australia in 1918 after suddenly developing traumatic neurasthenia. His medical history has only a brief reference to its possible causes, stating that he was 'well ... until April 1918 -- mistaken for spy -- very nervy'.