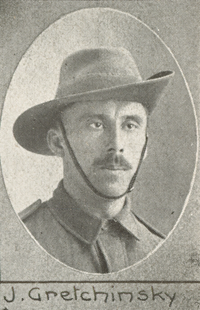 Arrived at Australia
from Vladivostok
on 25.04.1913
per Yawata Maru
disembarked at Brisbane

Application to enlist in AIF (NAA)

For some the process of Russianisation resulted in the loss or suppression of their original culture, which they grew up with; but many others developed, and maintained double (sometimes even triple) ethnic identities.[...] James Theodor Gretchinsky [...] was born in Gorodnia, in Ukraine (where it borders both modern-day Belarus and Russia). He applied to become an interpreter in the military censor's office, stating that he spoke 'Russian, Polish, and Courland, and one or two Russian dialects, also French and Japanese' -- by 'Russian dialects', he obviously means the Ukrainian and Byelorussian which would been spoken around him as he was growing up.