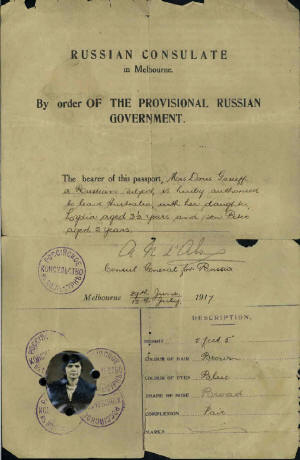 Arrived at Australia
from Far East via Moji
on 3.12.1912
per Eastern
disembarked at Melbourne

[...] in April [1916] the Mongolia brought ten Russians from South Australia, among them five Ossetians from the Port Pirie smelters who had joined up together in October 1915 -- Soltanoff, Gasieff, Mamsuroff, Dezantoff, and Tolparoff.

[...] Even less is known about what happened to the family of Bekza Gasieff. He was an Ossetian married to a Russian woman, and they left for Russia in the 1920s. In 1934 Peter Gasieff, his Australian-born son, turned up in India, destitute, where he appealed to Australian authorities after escaping from Russia. Unfortunately, the available documents shed no light on this family's misfortunes.