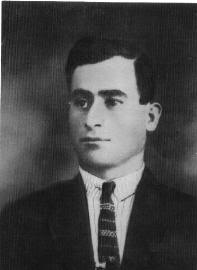 Arrived at Australia
on 1914
disembarked at Port Adelaide

[Michael] Elecoff, probably an Ossetian, came from the Caucasus, arriving in Australia in 1914, barely able to communicate in English. To survive, he worked as a labourer or a miner, taking any job wherever he could find one. Between June 1917 and December 1921 he moved 35 times, each time registering at the local police station -- from Kurri Kurri in New South Wales, to Bundaberg, Bingerra Sugar Mill and Mount Morgan in Queensland, back to Kurri Kurri, then to Port Pirie in South Australia and Broken Hill in New South Wales, before heading up to Queensland once more, to Bingerra Plantation, Bundaberg, Rockhampton, Aramac, Barcaldine, Longreach, Mount Morgan again, and Rockhampton ... month after month, year after year. Once, when he failed to register with the police, he was fined £2 3s 6d (more than he'd earn in a fortnight). In 1918, at Barcaldine, he received his second conviction for failing to register. In spite of his lack of English he managed to explain to the magistrate his misadventures. It turned out that he had already made a number of unsuccessful attempts to enlist in the army -- all over the country from Adelaide to Broken Hill, from Melbourne to Barcaldine. He explained that he had just passed his medical and was now on his way to Longreach to join the AIF there. On hearing that he was about to enlist, the magistrate let him off the fine.

Only one of Mick Elecoff's unsuccessful attempts to enlist, in Kurri Kurri, is reflected in his service records, and from his application form it is obvious how little English he had. The answer to the question about his next of kin is gibberish: 'Bara Elecof Elecoeff Terrcay Cawcar Hristianscay'. It is obvious that at first Mick repeated his surname in different ways, and tried to explain that his father lived in Terskaia province, in the Caucasus; then, seeing the official's unhappiness with his answers, he added that he is a Christian. Finally, realising that all this was not enough, in his own hand he wrote, beneath the official's gibberish, 'Mick Elecoeff, Russia'. That, at last, pleased the official. Despite all this, a few days later Mick was discharged as 'medically unfit' and went on his way, knocking about all over Australia in search of his piece of bread for several years more.

In comparison with many other Russians Mick Elecoff had a happy life later on. He was a handsome man, with curly dark hair and expressive black eyes, and in 1924 he charmed and married Ivy Shaw, a 16-year-old girl from Lithgow; they had four children. Unfortunately, in 1937 Mick died prematurely. His grandchildren, the dinkum Aussies, could not tell me much about their granddad; they knew only that he was from somewhere in Russia ... And again I thought that, in forging the nation, we lost something very important. I did all I could to reunite them with their granddad's past. Luckily, the policeman at Lithgow who wrote the report about Mick for his naturalisation was a conscientious one and he recorded Mick's life-story in detail, for posterity.