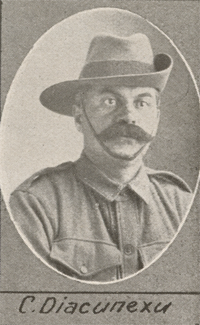 Residence before arrival at Australia 3 years in Romanian Army, 5 years in Manchuria

Arrived at Australia
from Manchuria
on 29.04.1914
per Eastern
disembarked at Brisbane

George Diaconescu served in the Romanian army (although a member of the Brisbane Russian community and enlisting in the AIF as a Russian subject, he was originally from Romania).