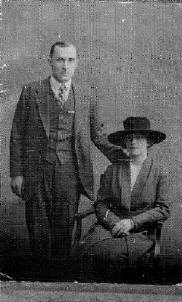 Residence before arrival at Australia America, England - seafaring; was in the merchant navy

Arrived at Australia
from England
on 12.02.1915
per Cannot Miulluti (?)
disembarked at Newcastle

Robert Deonck, the grandson of William Deonck from Byelorussia, tells the story passed down to him from his father. 'My grandfather was a Russian seaman, he came here on a ship. Like all good boys he left the ship, enjoyed the town and the ship left. And then the Australian government caught him as an illegal immigrant and they said, "You've got two choices: we'll send you back to Russia, or we've got a little war going on in Europe, it'll only go for three months". He was thinking, "OK, I go and join the army, they've got to take me back over to Europe, the war will go for three months and I'm away, I'll get back there. Then I don't have to face the authorities for jumping off the ship." But little did he know that he'd go through all the war.'

[...] 'My father said they were scared when they got there', this is Dorothy Eyles speaking, William Deonck's daughter, 'and I thought "Gee, it takes a lot to scare my father, it must have been horrendous for them".' He landed at Gallipoli in August 1915 with the 17th Battalion and was one of the last to leave when the peninsula was evacuated. For his bravery there he was awarded a Military Medal. His commander, Lieutenant-Colonel E.T. Martin, wrote in his recommendation for the award, 'As a bomber on Quinn's Post, where bombing was exceptionally heavy, he proved himself reliable, keen and energetic. His demeanour among his comrades is invaluable owing to his cheerful disposition under the most adverse circumstances.' -- for Russians, about whom normally military command seldom had a kind word to say, this was unusual praise. A major stumbling block for the Russians was their lack of English and, as I was reading Lieutenant-Colonel Martin's words to Dorothy, I asked her about her father's lack of English. She replied, 'It would not worry him. He spoke in a broken English but he could mix with anybody, he had that sort of personality. He was a wonderful, strict father, but very very funny, very witty -- he could make a joke out of anything.