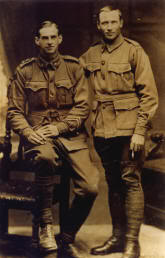 Carl Collath (right) with his friend
Courtesy of Brian Collath

Arrived at Australia
from London
on 09.1908
per Surry
disembarked at Sydney

In a few instances returning Russians married the girl-friends, widows or sisters of other Russian ex-servicemen -- Carl Collath's story is one example. His grandson sent me a photograph of his grandfather standing beside his best mate, who, according to family memories, 'was going out with a young lady named Alice Mary Penman (no one remembers his name though). He was unfortunately killed in action. When Carl Edgar Collath returned from the war, he made contact with this young lady, as he knew her well, to tell her the sad news. Subsequently, they must have hit it off because they married and became my grandparents.'