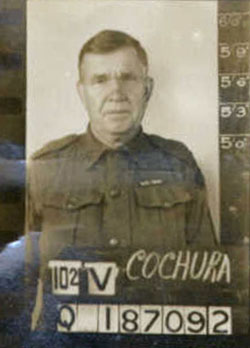 Arrived at Australia
from Vladivostok
on 12.12.1913
per Nikko Maru
disembarked at Sydney or Thursday Is

James Cochura seemed to be having an especially hard time during these years [in Egypt]. A peasant from southern Russia, he had been a foot guard in the Russian army for three years before coming to Australia in 1913. While working in a Newcastle coal mine in 1914, he suffered severe injuries, including to his skull. Under the strain of his war service his old skull injury caused him unbearable headaches, despite which he took part in all the major battles fought by Australian troops.

The Great Depression hit many Anzacs hard. [...] James Cochura [...] had to leave his block of land [in Temora] in 1933. He suffered from headaches after his skull was fractured in a mining accident in 1914; his condition was most probably aggravated by his army service in Egypt, where he spent several months in hospitals. He also suffered from back pains, but all his applications for a war veteran's pension fell on deaf ears at the Repatriation Department. He had to move to Sydney, and then to Brisbane, where he took 'casual work as a wharf labourer'.