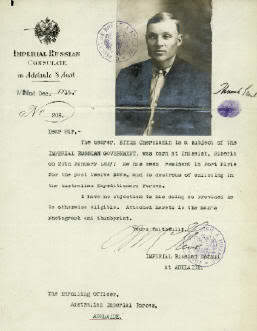 Arrived at Australia
from San Francisco
on 9.10.1912
per General Pasqua
disembarked at Port Pirie, SA

Residence after the war Adelaide, SA

Service or naturalisation records are not where you'd normally expect to find out about mates; yet even here, sometimes, a piece of information will surface unexpectedly. [...] From Effim Chernianin's application for naturalisation, we learn about his friend Private Nicholls: they returned together from the front and for his own holding address Chernianin gave his friend's mother's address