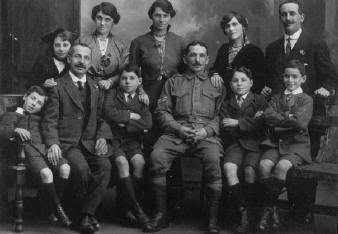 Arrived at Australia
from London
on 7.03.1901
per Whakatane
disembarked at Sydney

Residence after the war Sydney, 1924-1925 visit to London and Russia, after that lived in Sydney, Lithgow, Sydney

For others, such as Louis Brodsky, it was the miserable conditions of life in Russia that drove them to seek their fortunes overseas. Alexander, Louis Brodsky's son, only ever saw his grandparents in an old photo, and to him they 'appeared to be short-statured folks in poorish circumstances. They looked as though they might have unwillingly endured the eternal dread of pogroms and an extremely selfish aristocracy.' Louis might have been escaping family circumstances as much as social conditions, but perhaps there was a streak of restlessness, too. According to his son, 'There was always something Gypsyish about him for he preferred to wander'. Whatever the exact reasons, Louis took that familiar path down to the boats and the sea, choosing this tough, dangerous life over remaining a poor Odessa Jew: 'he preferred to try his luck than to knuckle down in Odessa'. What made Louis different to many others who also went to sea was his 'role of a keen critic and reformer'. His exposure to the appalling conditions under which seamen existed awakened a social conscience that never left him -- and it was that commitment to a spirit of justice and freedom for the under-privileged, rather than the Jewish traditions he grew up in, that he carried with him to Australia and passed on to his sons.

[...] By the time war came the Jewish 'seaman-wanderer' Louis Brodsky was a family man; he ran a shop 'with a big 2/6d sign on the window' for 'clothes cleaning and dyeing', as his son Alexander remembers, and in there 'Dad twirled his black moustache and ranted about socialism with his friends'. At the outbreak of war, 'Dad, ever restless and stirred by thoughts of adventure in the War, made many efforts to enlist ... He ... was repeatedly rejected because of his poor teeth and campaigned against the Army authorities so vigorously that he won newspaper publicity. He contended that there must be many able-bodied men, similar to him, being rejected for this comparatively minor defect; and he finally won approval from the authorities to create and establish a corps of men rejected only for poor teeth.' This was just the beginning of his odyssey. On reaching Egypt, he realised that the army was not the place for him and sought a discharge, which was refused, so he took French leave 'and assumed the identity of a Russian refugee named David Lipschitz, whose papers he purchased'. In this guise he worked as a steward on various ships, eventually returning to Australia, where he gave himself up to the military authorities in 1918, but was not prosecuted.