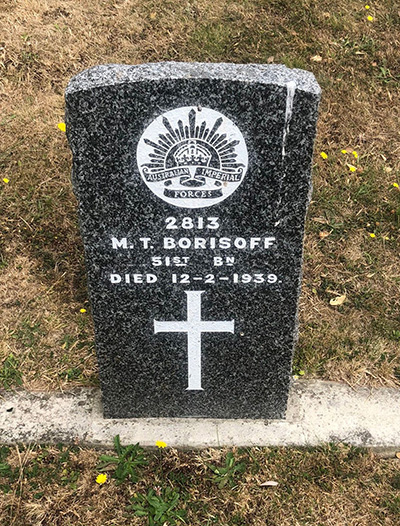 Most of the stories remain untold of those who attempted to return to Russia either permanently or just for a visit: sometimes all we have are a few unconnected facts, which allow us to surmise what their experiences were there. Michael Borisoff, a Karelian from Russia's northwest, was severely wounded at Mouquet Farm and spent many months hospitalised before being invalided to Australia, where he was in the home service for a while until his discharge from the army in October 1917. In June 1918, despite being discharged, he applied for a year's leave with free passage to Russia in the 'hope of recovery of my health': this was refused. In 1920 he was naturalised and when we next hear of him it is from an application dated October 1923. By now, he is resident at a Salvation Army aged men's retreat in Victoria, and not well. His application was for replacement medals; the reason he gave was that his own medals had been confiscated by Russian authorities 'upon leaving Russian detention barracks' in Chita (southwestern Siberia) in May 1923. One can only wonder what ordeals in Russia this sick man had survived -- how he had managed to escape from there.