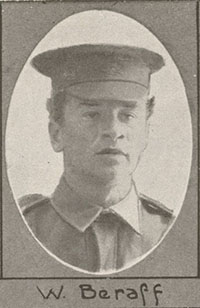 Arrived at Australia
from Far East
on 2.04.1912
per Kumano Maru
disembarked at Melbourne

In March 1916 at Tel-el-Kebir Walter Beroff was up before a court-martial. The four offences he was facing suggested that here was a hardened troublemaker: 'While on active service absent without leave'; 'offering violence to his superior officer'; 'resisting an escort'; 'using threatening language to his superior officer'. The accused was a tall, handsome young man with a dark complexion, black hair and brown eyes; he pleaded 'not guilty' to all charges. Beroff was from the village of Humalag, near Vladikavkaz, an Ossetian -- one can only guess what native Ossetian name had evolved into the name Walter. He came to Australia in 1912 via the Far East and, like many of his compatriots, tried work at Port Pirie but eventually shifted to Queensland, where he worked as a labourer. He joined the army at Rockhampton with a group of other Russians and arrived in Egypt on the Seang Bee; there, he joined the 49th Battalion.

The first witnesses at his court-martial stated only that the accused, when stopped by a piquet in Cairo, tried to break away, 'made a kick at Lieut. Johansen', and threatened him saying, 'You bloody f---ing bastard, I will remember you and your face and will do for you'. But it gradually became clear that his reaction was provoked by the piquet members themselves because Lieutenant Johansen not only asked for his pass but 'enquired from him his nationality', to which Beroff said, 'That's for you to find out'. The officer threatened to 'take him to Detention Barracks if he didn't give him his nationality'. That was the reason for Beroff's outrage and the threat: 'A Russian Cossack won't forget your face you bastard'.

Beroff speaking in his own defence was able to give a more favourable account of events. It turned out that he had gone to Cairo, to a dentist with a one-day pass and missed the last train owing to misinformation from his commanding officer (who later confirmed it). The piquet stopped him the next day on his way to the station and, as he began explaining what had happened, he heard (it is worth quoting this exchange in full):

'What bloody nationality are you' I said 'You have nothing to do with my nationality I am an Australian soldier' Other members of the piquet said 'Take the bastard' and one drew his helve whilst another grabbed me roughly by the shoulder. It was the man who drew his helve that I kicked at. One of the piquet said 'He (meaning myself) might be a spy. He can't speak English'. I lost my temper and do not know what happened afterwards.

There are two extremes here: the 'vigilant' Australian members of the piquet, on one side, for whom any man with an accent is an 'alien' and, consequently, a spy; and, on the other, a noble, hot-tempered Ossetian who is proud of both his 'Russian Cossack' background and his Australian uniform. It is tempting sometimes to deal only in polarities, but life is always more than such black-and-white oppositions. The hearing continued. Four officers from Beroff's 49th Battalion testified about his character -- 'straightforward in every way', 'good soldier', 'excellent character'. Finally, Major J.M. Dougall, from his battalion, diplomatically asks the court: 'to take into consideration the fact that all the soldiers of the particular Piquet were very inexperienced as soldiers on piquet duty, and that the accused is a very excitable man and resented inference cast upon his bona fides as an Australian soldier. ... In consideration of the extreme provocation I would ask the Court to be as lenient as possible considering also the circumstances under which he overstayed his leave.' Beroff was found guilty on all four charges and sentenced to three months' field punishment but was soon back with his unit. There, the 'Russian Cossack' integrated well and showed himself worthy of the confidence his commanding officers had in him, fighting bravely in France, and being promoted to sergeant.