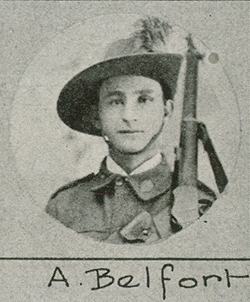 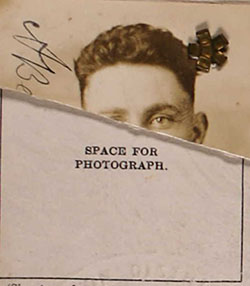 Residence before arrival at Australia 1907 came to New York from Odessa; worked on American Line 1914-17

Arrived at Australia
from Auckland
on 31.01.1918
per Austrapool or Liberty
disembarked at Melbourne

Naturalisation Applied in USA in 1915

Digitised application to enlist in the AIF (NAA)

The adventures of Alexander Belfort, whose AIF depot service was short, as he tried to enlist in the AIF with an old fracture to the right forearm, took him all over the world. In 1919 he sailed from Australia to New Zealand, then to Hawaii and Vancouver. During the following years he made numerous trips between Mexico, Peru, Spain, Turkey and the USA. In 1926, when his American ship visited Black Sea ports in the Soviet Union, he deserted the ship in Odessa. We still do not know how his life and the lives of other repatriates in Ukraine or Russia turned out, but as their archives begin to open to the public, we will one day be able to uncover their stories.