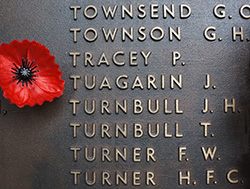 [...] John Tuagarin, a peasant from central Russia who could hardly speak English, was court-martialled on 5 October 1916 on a charge of 'disobeying a lawful command given by his superior officer'. What happened was that a corporal ordered Tuagarin, who had been sick for several days, to go on guard (they were in a support-line trench in the Ypres salient), at which Tuagarin said, according to a witness, 'No, me no go on guard'. Tuagarin gave evidence that he told the corporal he was ill. 'The corporal said You are a liar & I replied how am I lying when my head is all going round. The Corporal then insulted me by saying "Come on, you Goddamned son of a bitch Russian Chap" and also a spy. I answered the Corporal in Russian because I cannot speak English well. I asked him if he thought it was a Russo Japanese war & Russia was beaten & said Russia was fighting Germany. The Corporal could not understand me.' The conflict which started off as a misunderstanding had degenerated into deeply xenophobic abuse. The court found Tuagarin not guilty. [...] Tuagarin was killed in action [soon after that].