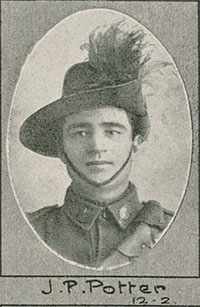 Arrived at Australia
from Saratov, Russia
on 12.07.1911
per Nikko Maru
disembarked at Brisbane

Despite his apparently European name, Potter turned out to have been born in Saratov, on the Volga River, and to have been Greek Orthodox. In addition, he gave his postal address as 'c/o Mr Stepanoff, Merivale St, Brisbane', a well-known lodging-house frequented by ethnic Russian émigrés, including many radicals. Taken together, all this provides sufficient grounds for including Potter with the Russians, culturally at least.