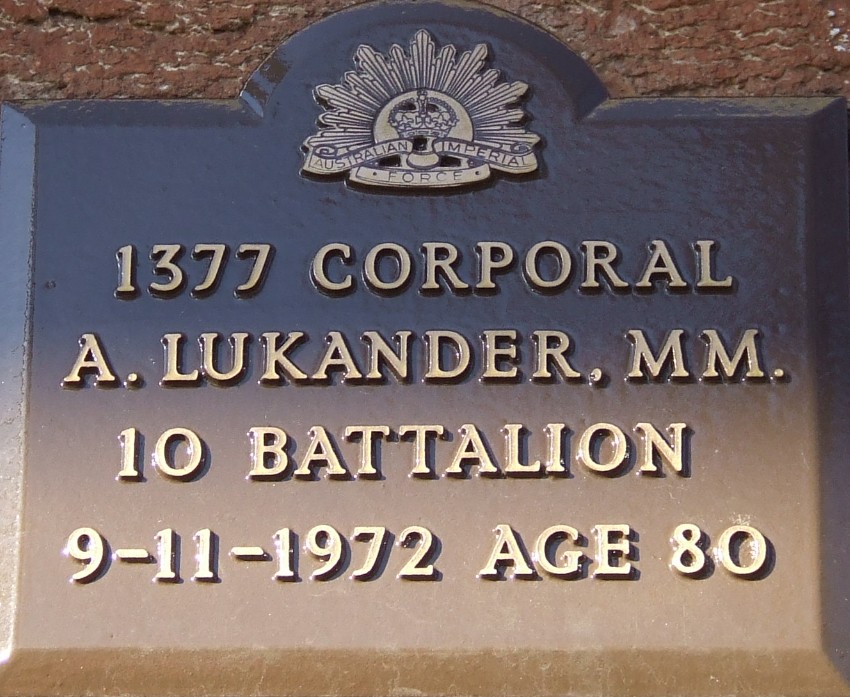 Arrived at Australia
from South America
on 12.12.1911
per Englhorn
disembarked at Adelaide

Residence after the war Semaphore, SA

After the capture of Polygon Wood [1917] the next objective was the ridge at Broodseinde, an action in which three Australian divisions (1st, 2nd and 3rd) took part. Corporal Albert Lukander was with a light trench-mortar battery in the lines here. Lukander was a Finn who had made Australia his home in 1911, one of those former seamen covered with elaborate tattoos. Among the first of the Finns to enlist in the AIF, he was wounded in the chest during the Gallipoli landing. On recovering, he rejoined his unit (10th Battalion) on the peninsula, remaining there until the troops were all evacuated at the end of December 1915.

At Broodseinde the three Australian divisions planned an attack for the early morning of 4 October [1917], which was to be preceded by a barrage of the enemy positions. This plan ran into problems, however, when the Germans, who were intending to make their own attack, got in first and 'opened up a heavy bombardment'. The citation for Lukander's Military Medal describes his role in that action, when he came under sustained artillery fire. 'Cpl. Lukander's gun was blown out and put out of action, he and some of his crew being partially buried'. Quick-thinking, Lukander immediately mounted 'a reserve gun and got into action again in time for our bombardment and fired all ammunition for the operation, effectively silencing the Machine guns which he had bombarded. By his cool courage and quick action the infantry were greatly assisted in their advance. ... Lukander, although in a shaken condition and subjected to very heavy artillery fire, set a splendid example to his men throughout the operation.'