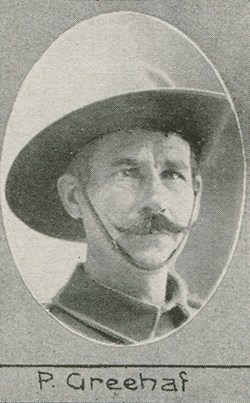 Parfeny Grehoff
Queenslander Pictorial, supplement to The Queenslander, 15 May 1915, p. 27

Arrived at Australia
from Far East
on 28.10.1913
per Eastern
disembarked at Brisbane

Residence after the war Qld

[...] Parfeny Grehoff had taken up poultry farming in Australia after his medical discharge caused by injuries he sustained at Gallipoli, but in May 1918 he re-enlisted, this time in the AN&MEF. He served as a private at Rabaul and Kokopo garrisons until getting sick, when he was invalided back to Australia once again.