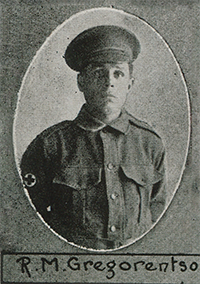 Arrived at Australia
from Japan
on 29.05.1910
per Nikko Maru
disembarked at Brisbane

Richard Gregorenko, who served during 1916-18 with the field ambulance on the Western Front, was another of the men purged from the army 'on account of Russian nationality'. On returning to Australia, he married and settled in Brisbane but the marriage did not last and, in 1929, he took his two young sons, Leonard and George, and moved to Callide Valley to take up a cotton-growing selection at Lawgi. He had to first clear the thick scrub before gradually building a small house from bush timber with cement-rendered bag-walls and a packed earth floor. Scrub wallabies, bush turkey, damper and rice were the main components of their diet. Although life was hard, there was one significant compensation from being there: Callide Valley had become the centre of a community of White Russians who had fled the revolution and now played an important role in pioneering this area. During the early 1930s around 100 Russian families lived in the area, including General Tolstoff and other Cossacks. They established the Russian Club at Tangool with a library and organised Russian concerts and dances, which attracted the interest of many local Australians as well. In the early 1930s Russian children accounted for nearly half of all pupils in local schools. The Gregorenkos became an integral part of this community, and the boys are still remembered by local old-timers.