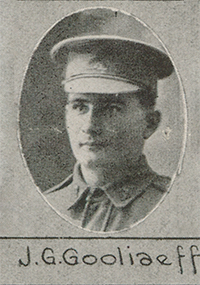 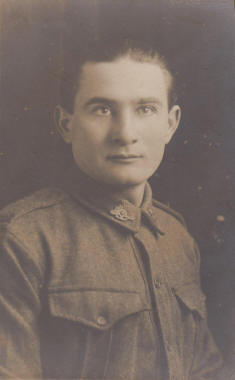 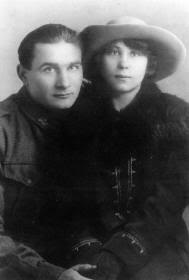 Residence before arrival at Australia Studied 1 year at Moscow University

Arrived at Australia
from Vladivostok
on 31.01.1913
per Yawata Maru
disembarked at Brisbane

'When World War I broke out', Justin Gooliaeff's son George relates, 'he decided to join the 1st AIF: his idea was that if a country was worth living in it was worth fighting for.'

[...] Another well-educated Russian to take on the challenge of the land was Justin Gooliaeff. He had married in England just before he was purged from the AIF 'on account of Russian nationality' and his wife, with their newborn son George, soon followed him out to Queensland. George recalls that his father 'was a qualified French polisher but his idea was that a man should do a man's work, that's the reason he took the farm on. ... My father drew a block of land in El Arish, north Queensland, with an assignment to grow sugar cane ... Like all ex-servicemen, my father was granted, on a long-term lease, a piece of north Queensland scrub (actually jungle), a loan of about £600 for the purpose of building a house, and the right to grow sugar cane on a restricted scale. In order to generate income so that he could develop his farm (and maintain his family) my father spent the early period cane-cutting in the Innisfail district -- a hard, back-breaking job -- and then on Friday night he would walk about 20 miles to his block of land, spend the weekend working on it, and then walk back to Innisfail to spend the weekdays cutting cane. After my father had developed his farm to a sufficient extent, and had his house constructed, my mother, with my sister and myself, moved up from Brisbane to live with him.' [...]

Justin Gooliaeff, spared the death of an Anzac, died an Australian pioneer. His son tells what happened. 'Everything went along very well until 1925 -- the farm prospered, and my family were due to have a trip to England the following year to visit my mother's relations. However, in 1925 a neighbouring farmer, in the middle of a very hot north Queensland summer, left some of the stumps in his property burning (in those early days many paddocks were still 'unstumped') and in an effort to cut a break and save as many farms as possible (the cane was due for harvesting) my father was running along a "headland" with other farmers, when the top of a burning tree (about 60 feet I believe) burnt off, fell down, and hit my father on the top of his head, killing him instantly.' Memories of Gooliaeff persisted for a long time in the district.