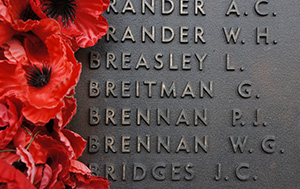 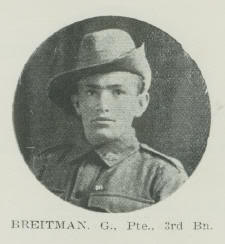 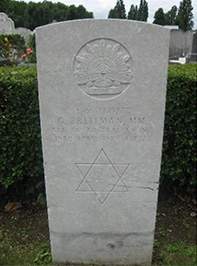 'Taking the votes of members of the 3rd Battalion on the second Conscription Referendum at Halinghen near Samer.' E01440 E01441 (AWM)

George (Gersh) Breitman was [...] from the Ukraine, [...] he was Jewish and came from an area (Chechelnik in Podolia) where large Jewish communities still kept to their traditional way of life. In Australia he had worked as a labourer. Breitman 'showed himself fearless and quick to act' during the advance at Ligny on 2 March, 'by rushing out from his post to assist 2nd Lieut. Boileau who had attacked four Germans in the open', as his commander wrote. 'By his prompt action this man no doubt saved his officer's life and materially assisted in the capture of the four enemy.' Breitman was awarded the Military Medal for his bravery.

The last Ukrainian-born Anzac to die as a casualty of war was George Breitman. In spite of being gassed in August 1918, he spent the winter of 1918-1919 in the harsh conditions of the former front line, where Australian soldiers were engaged in salvage operations, reburials of the fallen and similar tasks. Breitman developed pneumonia, was transported to an English hospital, but his gas-affected lungs failed: he died on 19 April 1919.